In a clinical investigation conducted in 2001, the effects of cocaine taken before and after Wellbutrin (bupropion) were examined. The case study demonstrated that combining cocaine and bupropion poses a risk of synergistic cardiovascular toxicity.

This increased toxicity can cause:

People who take bupropion responsibly should notice an improvement in their mood, while those who misuse it will notice adverse side effects. Wellbutrin abuse can result in:

These symptoms are only increased when Wellbutrin is mixed with cocaine.

Who Should Not Take Cocaine and Wellbutrin?

No one should mix cocaine with anything, period. There is no safe usage of the stimulant. Cocaine psychosis, characterized by paranoia, hallucinations, strange thoughts, and uncharacteristic behavior, can also be brought on by high dosages and regular heavy usage. If you are prescribed Welbutrin and you think you have an addiction to cocaine or other narcotics, its important to find help.

Is Wellbutrin More Harmful with Cocaine than other SSRIs?

Those who abuse Bupropion by snorting or injecting it while also abusing cocaine put themselves at high risk. As noted above, Wellbutrin has very similar effects to stimulant narcotics when not taken as recommended. It’s difficult to say if other drugs can be more or less harmful when cocaine is extremely dangerous on its own.

These types of medication will not change in effectiveness or potency by changing the method of consumption. Therefore it is not common for people to abuse or attempt to “get high” from these substances.

Bupropion (Wellbutrin) is an antidepressant medication that works in the brain. It is prescribed for the treatment of the major depressive disorder (MDD), and seasonal affective disorder (SAD), and to aid people who are trying to quit smoking. Bupropion may also be helpful when prescribed for bipolar disorder and attention deficit hyperactivity disorder (ADHD). Some studies show that Wellbutrin might be useful in treating methamphetamine dependence as well. Bupropion hydrochloride is available in 3 different forms: extended release, sustained release, and immediate release. There are other products with the active ingredient of bupropion including Zyban, Aplenzin, and Forfivo.

Selective serotonin reuptake inhibitors make up the majority of antidepressants (SSRIs). They increase serotonin levels in the brain. Bupropion works differently than other antidepressants. It is a norepinephrine-dopamine reuptake inhibitor (NDRI). The neurotransmitters dopamine and norepinephrine, commonly known as noradrenaline, are increased by an NDRI. Although the FDA views Wellbutrin as a prescription drug that is not addictive, there is some evidence that, when misused, the drug can lead to addiction. It’s also one of the more widely used and accessible prescription medications.

What are the Effects of Mixing Cocaine and Wellbutrin?

Abusing Wellbutrin has some parallels to abusing cocaine. Both drugs function similarly, activating the neural system and preventing dopamine and norepinephrine from being reabsorbed. Cocaine and amphetamines both cause liver toxicity and damage. When considering a prescription for Wellbutrin, doctors should proceed with the utmost caution in treating patients who have liver impairment, particularly cirrhosis of the liver. In those whose livers were unable to effectively process it, Wellbutrin has been associated to long-lasting liver issues. There is a high risk of liver toxicity or damage when Wellbutrin and cocaine are taken together.

When misused, both cocaine and Wellbutrin (bupropion) can have life-threatening and even lethal effects. Health concerns only get worse when drugs are combined. Wellbutrin is regarded as a non-habit-forming drug, although some users have abused it since it may mimic the high from cocaine when crushed and snorted.

Seizures may happen if a person consumes too much of either or both substances. The body’s seizure threshold is lowered by cocaine, and when combined with Wellbutrin, the threshold is further lowered. Furthermore, Bupropion and cocaine can both cause significant cardiovascular complications including:

What Are The Most Common Questions About Cocaine And Wellbutrin?

How Long After Taking Cocaine Can You Take Wellbutrin?

Cocaine highs typically last 20 to 30 minutes, which encourages users to take more of the drug. However, the effects can linger for a short while longer. When you consume cocaine, your body starts metabolizing it right away into other compounds. For 2 to 5 days, metabolites stay in your blood. Welbutrin shouldn't be used until these metabolites have left the body.

Does Wellbutrin Affect How High You Get From Cocaine?

In general, Wellbutrin works to elevate mood by raising dopamine levels. A user may try to improve their mood or get a rush through misuse. When crushed and snorted Bupropion has similar effects as cocaine. It's often referred to as "poor man's cocaine" by those who abuse the prescription medication. Mixing cocaine with bupropion in this manner certainly elevates the desired effects.

Why Is Wellbutrin Called The Poor Mans Cocaine?

When crushed and snorted Bupropion has similar stimulating and euphoric effects as cocaine.

Reach Out For Help

Although abusing bupropion may make the person feel wonderful, this won’t continue for very long. Norepinephrine levels rise in the body as a result of drug abuse. A quick influx of the neurotransmitter will make the body need more in order for the user to feel good, developing an unmanageable dependence on the substance. Treatment is strongly advised if you or a loved one struggle with cocaine, Wellbutrin, or both. 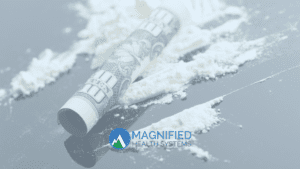